For starters, no one is being denied access to vaccines. The White House has made clear it has enough vaccine doses available to get every American fully vaccinated, including a booster shot.

The issue is actually about therapeutics, some of which are in limited supply, but there is no evidence that white people are being denied COVID-19 therapeutics, either. Still, Trump accused New York state of discriminating against white people, saying its prioritization policy for COVID-19 treatment during times of limited resources is “anti-American.”

“If you’re white you have to go to the back of the line to get medical help,” Trump said, calling on the Supreme Court to “shut down this flagrant civil-rights violation immediately.”

Trump is referring to a New York Department of Health policy that states: “In times of limited supplies of monoclonal antibodies (mAbs) and oral antivirals (OAVs), providers should prioritize patients eligible for treatment based on their level of risk for progressing to severe COVID-19.” The policy includes a chart of risk groups to be prioritized for COVID-19 treatments, and considers factors such as age, living in a long-term care facility and medical conditions that put someone at high risk of severe COVID-19.

A footnote states, “Non-white race or Hispanic/Latino ethnicity should be considered a risk factor, as longstanding systemic health and social inequities have contributed to an increased risk of severe illness and death from COVID-19.”

Michael Lanza, a spokesman for the New York City Health Department, told us via email that Trump is distorting the policy.

“No one will be denied treatment based on their race and race is not a deciding factor for whether or not to fill a prescription,” Lanza said. “We have asked our pharmacy partner, Alto, to collect data on demographics to assess equitable distribution of antiviral treatments.”

“New Yorkers of color have borne the brunt of this pandemic due to structural racism and the legacy of disinvestment in many minority communities,” Lanza said. “Throughout the pandemic, the City has acknowledged this and has focused a great deal of work in our Taskforce [on] Racial Inclusion and Equity neighborhoods. Doctors are advised to consider the disproportionate impact felt by these communities in addition to systemic health disparities when prescribing treatments for people who are at highest risk for severe COVID-19 outcomes.”

According to the Centers for Disease Control and Prevention, Black and Hispanic people are two and a half times more likely to be hospitalized due to COVID-19 than white people, and about twice as likely to die. 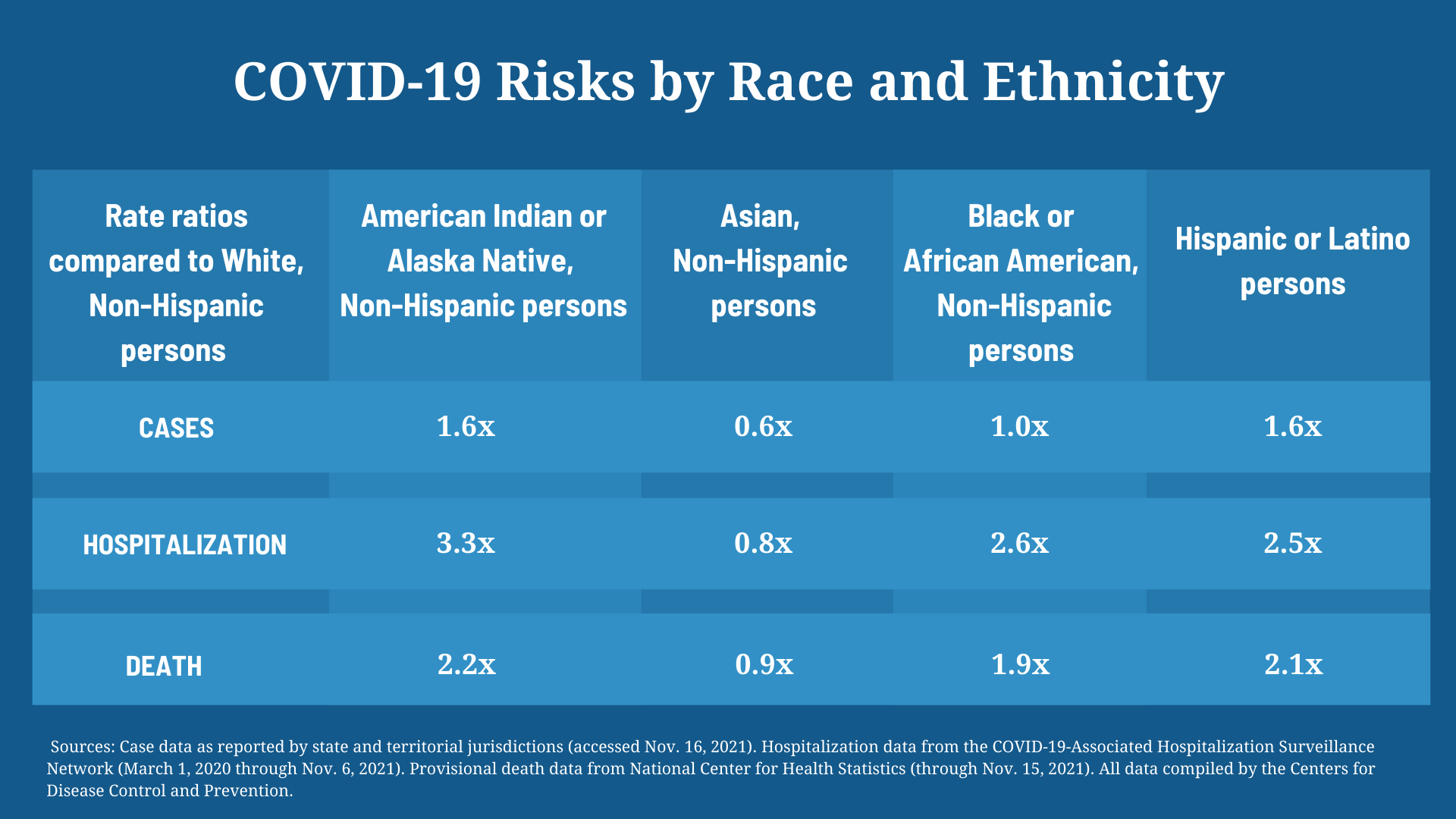 “Race and ethnicity are risk markers for other underlying conditions that affect health, including socioeconomic status, access to health care, and exposure to the virus related to occupation, e.g., frontline, essential, and critical infrastructure workers,” the CDC states, as it did under Trump, on a webpage devoted to health disparities by race and ethnicity.

A CDC notice in December says, “Long-standing systemic health and social inequities have put various groups of people at increased risk of getting sick and dying from COVID-19, including many people from certain racial and ethnic minority groups and people with disabilities.”

According to the CDC statement, “Studies have shown people from racial and ethnic minority groups are also dying from COVID-19 at younger ages. People in minority groups are often younger when they develop chronic medical conditions and may be more likely to have more than one condition.”

Trump pointed to a Wall Street Journal opinion piece that said there is no scientific evidence to suggest that any particular race — in and of itself — is more prone to serious illness or death from COVID. The authors argued that race needs to be disentangled from other underlying risk factors, such as income or occupation, that may be more indicative of higher risk. They pointed to some studies that show such socioeconomic factors — not race — may be the reason for different outcomes.

“There isn’t any study we have seen that, controlling for other factors, such as income, education and residence, shows clearly that Americans of Hispanic, African or Asian ancestry are at greater risk for severe Covid-19,” the authors, John B. Judis and Ruy Teixeira wrote. “There is no valid medical argument to justify New York state’s criteria.”

John B. Judis is a journalist and author. Ruy Teixeira is an author and a senior fellow at the left-leaning Center for American Progress.

“It is probable that a good part—perhaps most—of the observed racial disparity in Covid effects is attributable to factors that can be loosely grouped under class: income, education, poverty status, occupation, health-insurance status, housing and so on,” the authors wrote. “Who should receive scarce Covid treatments should be based on genuine medical risk factors such as age and comorbidity, but class disparities can be relevant to deciding where to spend money to increase access to public-health benefits including vaccination and testing.”

They argue the policy could result in scenarios where wealthy non-white or Hispanic people — who may be at lower risk — might get priority over poor white people.

America First Legal, an organization founded by Stephen Miller, a former senior adviser to Trump, sued the New York State Department of Health on Jan. 17 over what it called a “racist and unconstitutional” directive.

Echoing some of the former president’s rhetoric, Miller said: “New York’s racist COVID decrees dispense lifesaving medicine based on the race or ethnic background of the patient. New York is deciding questions of life and death based on a New Yorker’s ancestry. This is outrageously illegal, unconstitutional, immoral, and tyrannical.”

The group also previously threatened legal action against the Utah and Minnesota departments of health for similar policies that considered race a risk factor to be weighed in prioritizing COVID-19 treatments. But both states have since backtracked.

Utah and Minnesota Revise Their Policies

On Jan. 11, the Utah Department of Health wrote: “Given the extreme scarcity of COVID-19 treatments due to the prevalence of the omicron variant, we are re-evaluating the calculator and comparing it to current data to determine what factors best capture those at most at-risk for severe disease, hospitalization, and death.”

The department created a risk score calculator in which “[p]oints are assigned to factors such as sex, age, pre-existing conditions, current symptoms, and race/ethnicity.”

While “[n]obody automatically qualifies for treatment based on their race/ethnicity,” the statement said, a person who is non-white or Hispanic/Latinx receives two points. Ten points are needed for a vaccinated person to qualify for treatment, and 7.5 points for an unvaccinated person.

That policy decision was based on research into more than 100,000 Utahans who tested positive for COVID-19 that found “non-white race or Hispanic/Latinx people are 35-50% more likely to be hospitalized,” the statement said.

But on Jan. 21, Utah reversed course, announcing that it was removing race and ethnicity from its risk score calculator.

“Instead of using race and ethnicity as a factor in determining treatment eligibility, UDOH will work with communities of color to improve access to treatments by placing medications in locations easily accessed by these populations and working to connect members of these communities with available treatments,” the statement read.

Acknowledging the threat of lawsuits, the statement also noted, “As with the protected class of race, providing additional points based on gender raises legal concerns.”

The Minnesota Department of Health also had included “BIPOC [Black, Indigenous and people of color] status” in its scoring system when prioritizing patients in the event that demand for certain monoclonal antibodies outstripped supply. But in a Jan. 12 notice, the department quietly removed race from its scoring system.

According to the Minneapolis Star Tribune, “The Minnesota Department of Health in a statement did not explain the timing or reason for the change, other than to say that it is constantly reviewing its policies to ensure ‘that communities that have been disproportionately impacted by COVID-19 have the support and resources they need.’”

While Utah and Minnesota have changed course, New York is not backing down.

Erin Silk, a spokesperson for the New York State Department of Health, told Newsweek the guidance related to race “is based on CDC guidelines that show COVID-19 mortality rates are higher among certain demographic groups, including senior citizens, immunocompromised individuals and non-white/Hispanic communities.”

“It is important to note that no one in New York who is otherwise qualified based on their individual risk factors will be turned away from life-saving treatment because of their race or any demographic identifier,” Silk told Newsweek.

FactCheck.org does not accept advertising. We rely on grants and individual donations from people like you. Please consider a donation. Credit card donations may be made through our “Donate” page. If you prefer to give by check, send to: FactCheck.org, Annenberg Public Policy Center, 202 S. 36th St., Philadelphia, PA 19104.

Trump on ‘Race-Based Medicine’ for COVID-19