Based on George Floyd’s autopsy report, Dr. Vik Bebarta said it was his opinion that Floyd died from asphyxiation due to a compressed or blocked airway.

The federal trial of three former Minneapolis police officers charged with depriving George Floyd of his civil rights on the night he was murdered continued Wednesday morning in St. Paul.

Tou Thao, J. Alexander Kueng and Thomas Lane and their defense teams were present in court, while Derek Chauvin, the officer who held his knee on Floyd’s neck for more than nine minutes on May 25, 2020, pleaded guilty to the charges before the federal trial began. Chauvin was found guilty of second-degree manslaughter, second-degree murder and third-degree murder in a state trial in April 2021.

On Wednesday, witnesses testified about the officers’ actions, and what they could have done to save Floyd’s life.

Another nationally renowned medical expert spent the day testifying for the prosecution, saying that George Floyd did not die from a drug overdose or excited delirium. Dr. Vik Bebarta testified that Floyd died from a lack of oxygen to his brain.

“He was suffocated. His airway was closed and he could not breathe,” he said.

Bebarta is an emergency room doctor and toxicologist from Colorado. He testified that George Floyd had a tolerance to drugs – and did not have high amounts in his system the day he died. He went on to describe the syndrome known as “excited delirium,” how to treat it and how he believed that Floyd was not suffering from the condition at the time of his death.

In cross examination, Thao’s attorney Robert Paule asked a lot of questions about excited delirium, trying to re-plant the idea that the officers thought that’s what Floyd was exhibiting. Bebarta continually stated that it was his opinion that Floyd had not displayed any symptoms of the condition, and that he died from asphyxiation.

Following Bebarta’s testimony, the prosecution called McKenzie Anderson to the stand, a forensic scientist with the Bureau of Criminal Apprehension. She detailed what she observed when she arrived to the crime scene, and what evidence was gathered and collected.

Anderson is scheduled to resume her testimony Thursday at 9:30 a.m.

McKenzie Anderson, a forensic scientist for the Bureau of Criminal Apprehension (BCA) was the next to take the stand for the state. She said she first learned of the incident around 11:30 p.m. on May 25. McKenzie said she and a colleague then arrived to the scene around 1 a.m. May 26.

Anderson told the court she has been the leader of a crime team at the BCA for the last six years. She said the crime team is responsible for gathering evidence and testing samples obtained from a scene. McKenzie went on to describe what she observed at the scene when she arrived, and what she and her team decided to gather as evidence. She said among other evidence, her team tested what appeared to be blood stains inside the MPD squad car that Floyd had been placed into, and additionally, a shoe and strap.

She said the BCA team went back to Floyd’s vehicle, a Mercedes Benz SUV, in December at the prosecution’s request to gather more evidence — including any pills, gum or currency left behind. McKenzie said the team collected two white pills from the center console, which were then sent to the lab for testing. McKenzie said her team also went back to the squad car at the defense’s request in January to look for additional evidence.

When the prosecution wrapped its direct questioning, Judge Magnuson excused the jury.

Anderson is expected to be back on the stand Thursday at 9:30 a.m.

After the court’s afternoon break, Bebarta testified during redirect that although the diagnosis “excited delirium” has changed throughout time, treatment for a person in Floyd’s state – pulseless and not breathing – has remained the same. He reiterated that there was a duty to end Floyd’s restraint immediately and perform medical aid.

After a few more questions from the defense, Bebarta stepped down from the witness stand.

Court returned from lunch with Bebarta’s continued testimony about excited delirium on cross-examination.

After the lunch break, court resumed with cross examination of Dr. Berbarta. The defense has focused on excited delirium, agitation caused by high drug use. Bebarta said it was his opinion that Floyd did not display symptoms of excited delirium.

Referencing the defense’s exhibit of the American College of Emergency Physicians white paper report on excited delirium, Bebarta agreed with defense attorney Robert Paule that training and treatment around excited delirium has advanced significantly between the time the report was written in 2009, to the day Floyd died in 2020.

Thomas Lane’s attorney, Earl Gray, then went over the timeline of Floyd’s restraint and incapacitation, focusing on Lane’s alleged attempt to treat Floyd by checking his pulse and eventually performing CPR. Gray reiterated some of paramedic Derek Smith’s testimony about being concerned with the growing crowd at the scene, deciding to do a “load and go” and begin life-saving measures on Floyd after he had been loaded into the ambulance. Bebarta agreed that Lane helped Smith in the ambulance with chest compressions after he was asked to do so.

Bebarta returned to the witness stand to answer questions about excited delirium, a severe form of agitation that could arise from high concentrations of stimulants in the body.

The controversial medical condition has been a recurring topic during trial, as the defense team has insinuated that Floyd could have been experiencing excited delirium in the time before his death. Bebarta doubled down on his earlier opinion, saying Floyd did not appear to be severely agitated or suffering from the condition, making it unlikely that excited delirium was a factor in his death.

Bebarta went on to tell the court that had officers at the scene performed CPR and repositioned him as he started to go into cardiac arrest, the situation could have been “survivable.”

During cross-examination, the defense narrowed in on Bebarta’s medical and educational background. Bebarta agreed with the defense that medicine and medicinal terms generally change quickly throughout time, saying there are now more accepted terms to describe excited delirium.

The defense then asked if the medical condition is only caused by stimulants or if a person’s mental health can also play a role. Bebarta said ingesting stimulants can cause psychotic episodes, hallucinations and in some cases, severe agitation. He said being overly stimulated can also exacerbate already existing mental health issues.

The first witness called by the prosecution Wednesday was professor of Emergency Medicine-Medical Toxicology and Pharmacology at the University of Colorado School of Medicine, Dr. Vik Bebarta.

Bebarta told the court about his extensive experience as a doctor in emergency medicine, including during his time in the military where he rose to the rank of colonel.

State calls first witness of the day to the stand: Dr. Vik Bebarta, a professor of Emergency Medicine-Medical Toxicology and Pharmacology at the University of Colorado School of Medicine.

The prosecution pressed Bebarta on his knowledge of toxicology and how certain substances react with a person’s body when ingested. He agreed that various chemicals were detected in George Floyd’s blood after he died, including fentanyl and methamphetamine. He told the court it was his opinion that Floyd was a documented, experienced drug user and that the low levels of drugs in his system could not have been a factor in his death. Further, he said that based on Floyd’s conduct and appearance, it did not appear that Floyd was suffering from an overdose or imminent overdose.

Bebarta agreed that, based on Floyd’s autopsy report, he died from asphyxiation due to a compressed or blocked airway.

So far Dr. Berbarta testifies George Floyd did not die from a drug overdose but rather from lack of oxygen to his brain caused by suffocation (asphyxiation).

After almost an hour and a half of questioning, Judge Magnuson called the court’s first morning break.

RELATED: Who is on the jury for the federal trial of three former Minneapolis police officers?

MPD Officer Nicole Mackenzie was back on the stand Tuesday following her testimony on Monday. She is currently the MPD’s medical support coordinator, and spoke about officer’s training when it comes to medical aid.

She testified that officers are taught to start CPR “immediately” if they can’t find a pulse, and especially zeroed in on the training Tou Thao received.

Officer Mackenzie said if officers suspect a drug overdose they should administer Narcan immediately, but this wasn’t done for George Floyd. Mackenzie also told jurors the response of both Lane and Kueng was “inconsistent” with MPD’s training on medical care because, “I didn’t see any efforts to move (Floyd) into the side recovery position.”

During her testimony, the defense team took issue with the number of times the jury was asked to view the video of George Floyd’s death. Judge Paul Magnuson agreed, and sustained their objections.

The defense attorneys objected many times to the “needless presentation of the same video.”

Judge Magnuson sustained the objection, saying “a word picture would be better than this repetitious showing of this video over and over.”

Following a break for lunch, Officer Mackenzie returned to the stand to be cross-examined by Robert Paule, Thao’s attorney.

Mackenzie reiterated her belief that the use of Derek Chauvin’s knee on Floyd’s neck as a restraint was inconsistent with MPD training, and that she was never taught that tactic.

Paule pressed her on the condition referred to as “excited delirium,” and how officers have been trained to handle suspects believed to be showing the symptoms. Mackenzie testified that the purpose of showing a video on excited delirium to officers in training is for them to consider how regular compliance techniques might not work in that scenario.

She testified on use-of-force training techniques until afternoon recess was called by Judge Magnuson. 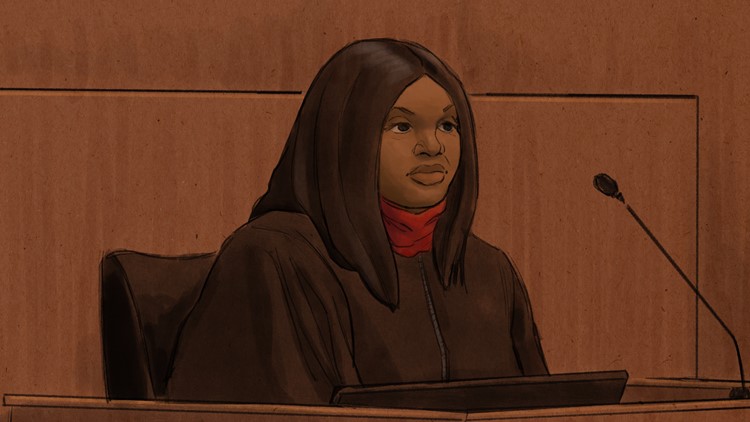